When Nina died, one of the things she left me was the ownership of two vehicles. The first, my primary car when she was alive, was a Mazda 3, a small sedan with a six speed manual transmission. It’s both fuel efficient and fun to drive. The second was a Mazda CX-9, a crossover with a third row for hauling kids but which did not, as Nina put it uncharacteristically non-metaphorical but accurate language, make her feel like a minivan owner.

We once owned a Toyota Sienna. Or I should say the minivan owned Nina. It was after Benny was born and Nina was struggling with the ineluctable truth of parenting multiple kids: it’s a huge pain in the ass to get them in and out of conventional sedans and wagons. She advocated for us to buy a new minivan. After the kids got bigger and every conceivable do-dad on the minivan broke (the automatic sliding doors went about five months after we bought the car, Benny stuck a nickel in the cd player, the sun roof flew off the car and nearly killed someone behind Nina on the highway, and the interior lights malfunctioned), Nina decided she’d had enough of minivan living and went out and bought the CX-9, which she loved.

Until recently, I hadn’t thought much about getting rid of the extra car — not out of sentimental attachment to Nina’s SUV, but due to the fact they served very different purposes. The CX-9 was for longer trips because of space and also the kids get carsick in my backseat if we travel more than a few miles. But the sedan got almost 40 mpg on the highway and fit nicely into my downtown parking deck so, since I drive all over North Carolina for work, it didn’t seem to make sense to drive a larger vehicle for work.

But the past couple of years making two car payments, paying taxes for two vehicles, and doing maintenance and repairs for both cars, convinced me it was time to consolidate. My first thought was a hybrid crossover – same space, but more mpg was my working theory — but the hybrid crossovers all had less space than our current one. Then I found a novel solution: Chrysler had just introduced a hybrid minivan – the first of its kind. I was not a fan of the minivan – is anyone? – but I went for a test drive because the hybrid concept seemed so right for my circumstances.

What I didn’t realize before driving the car is that Chrysler’s new hybrid minivan only comes in the high-level trim packages, meaning it’s not only got an advanced hybrid power system, but ALL the bells and whistles: entertainment system with touchscreens, seats that fold down with the touch of a button, more USB outlets than the Apple Store, self-parking ability and blind spot monitoring, a tricked out sound system, Bluetooth, Wi-Fi, vented seats (the air comes THROUGH your seat and cools your back so it doesn’t stick to the seat. Brilliant!!), and even sliding side doors that open hands-free with a mere gesture of your foot under the car.

Like I said, I’ve never been a massive proponent of the minivan. But this was a sweet ride. It could haul seven people and a ton of stuff and it got fuel efficiency ratings that rivalled my little Mazda. The sales guy at the Chrysler dealer had me on the line. Until I saw the sticker price. HOW MUCH for a minivan?! Wow. Ok, it’s a lot of technology and a big car for being so economical, but he was talking about payments that were close to my mortgage (they also low-balled me on the trade value of my two cars) than any car payment I ever made.

I left feeling the disappointment you can only feel when you know you can’t get something that until very recently you had no idea you even wanted. There must be a compound German word for this?

I also felt stuck in my car search. Chrysler made the only hybrid minivan and they’d only been making it for two model years, so there was almost no used stock to defray the big sticker price. But something the salesman at the Chrysler place said as I was leaving stuck in my head. He asked if I wanted to see some of the regular, non-hybrid Chrysler minivans. “They’ve got all the same bells and whistles but at a much lower starting price because of the hybrid thing,” he told me, “and we get used ones pretty often, though they go fast” he added because: car salesman.

A few days later I went online and searched for the less fuel-efficient version of the Chrysler minivan, which was rebranded as the Pacifica after a total minivan overhaul by Detroit in 2017. I found a 2017 Pacifica on CarMax with the same trim my hybrid test drive car had, but at a considerably lower price and with only 4,500 miles on it. I was psyched. Wait. I was psyched? Was I actually excited about minivan shopping? What was happening here? The car wasn’t at the Greensboro store, so I had to request a transfer – the transfer window only building my newfound minivan anticipation (don’t judge me!).

I told the kids we’d be test driving it on Saturday. I knew this would get a reaction because Benny’s latest mania is for cars. Or, more accurately, it’s for car brands. When Benny gets into something, it’s epiphenomenal: he doesn’t really do the whole “thing in itself” aspect. When he loved baseball, it wasn’t so much the sport itself (he hated watching actual games) as the team names, mascots, and locations of all the clubs and their minor league affiliates – he had at one point nearly memorized the entire A through AAA minor league system for each MLB franchise. So his car fixation is more about brand and model names and their multifarous (and ever-evolving, as he’s learning) logos. I told the boys that this car had a touch screen entertainment system built in at their seats and a bunch of other cool stuff, and that they’d get to scope out other cars at the dealership. Sold. 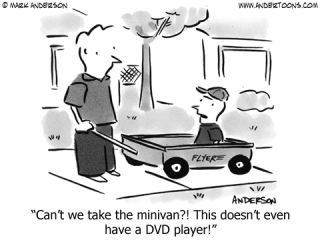 Well, sorta. Being at the dealership reminded me of the other times we had purchased cars with kids in tow. It usually involved Nina and I tag-teaming so that one of us could entertain the increasingly impatient children long enough for the other to glean information or make progress on a deal with the salespeople. This time my tag team partner was Pete. But I didn’t drag him along because I needed childcare (I don’t have that kind of Machiavellian forethought, sadly). The reason I asked Pete to come is that I trust his judgment entirely on car buying. He is completely indifferent to the sex appeal of a car. Not that he doesn’t appreciate a good ride, but he can spot value and reliability and, above all, functionality, through the haze of car trappings better than anyone I’ve ever known. We used to tease him for buying a purple Nissan Quest whose shade of paint would have better suited underthings at Victoria’s Secret than a family automobile. But darned if that car wasn’t extremely reliable and exactly what Pete needed.

The Chrysler was as advertised: loaded with high-end gadgetry. The automatic seats, the blind spot alert system, motion sensing automated doors, an emissions reduction system that shuts the engine off at idle and restarts it automatically when you release the brake. We went for a test drive. I’m not going to try to tell you it was as fun as driving my sporty little Mazda. It’s a minivan. But the Pacifica had more than enough get up and go to feel good on highway merges. The ride was smooth and the kids were smitten with the screens in front of them (the system comes with Sudoku, a version of license plate bingo, and a few other built-in apps that are on the vegetable side of the video game spectrum).

By the end the ride I was fairly convinced. The remaining questions: 1. Was there a better value at a lower price point; and 2. How much were they going to offer in trade for my car and Nina’s SUV? When we got back to the lot Pete and I perused the other minivan offerings. There were a couple that seemed to be good values amongst the Hondas and Toyotas, but they were all older, all had higher mileage, and fewer features. The salesman came and broke down the trade offer and financing for me, both of which worked out to be in my range. The total payment was higher than any I’d ever made on a car before, but not more than my two existing car payments. I ran a quick check on GEICO’s website and reckoned I’d also be paying $400 less in insurance per year. The purchase was Pete-approved, who’s to gainsay?

I decided to pull the trigger. Sure, it was a big purchase, but it solved several issues I’d been mulling. And I was excited to drive the car off the lot, which may not be the best reason to buy a new car, but sure beats the feeling of deep satisfaction from finding a very useful but uninspiring vehicle? The kids started buzzing when I told them I was going to buy. What was really impressive was, an hour and a half of paperwork later, they retained their buzz on the drive home. There has never been a more proud Chrysler owner than Benny Duberstein (“I can’t believe we actually own a Chrysler! I can’t wait to tell my friends” is not really a phrase I associate with most car enthusiasts).

I also feel pretty certain that Nina would have been on board, despite her preexisting minivan aversion. I think she’d have liked the fanciness of this model and the kids’ excitement. She’d have appreciated my plan to consolidate the cars and supported me being excited about the purchase – a bit of glimmer and shine in a challenging, lonely universe of solo domesticity — assuming that in this scenario she would be both able to appreciate the plan and also dead so that she doesn’t still need her car. These types of imagined reactions are complicated but startlingly common in my new life.

The excitement is the strangest part of the whole thing. I was genuinely jazzed to get in the car to go to Costco yesterday (tested the automated features on the doors, tried out different cargo configurations using the automated stow-n-go seating) and to drive Freddy to school this morning (we listened to some tunes on the sound system, used the climate controls, I even set the electronic parking brake just for kicks!). It all adds up to the feeling that my midlife crisis has taken the unlikely form of a Chrysler minivan. While I think she’d be slightly baffled at the strange turn, I’m pretty certain Nina would get a very big laugh out of that.