Sometimes when I’m trying to get my bearings it helps to borrow a specific structure or image. There’s the Stages of Grief, bequeathed on us for better or ill by Kubler-Ross, by which we can gauge our progress and feel badly about our failure to achieve proper staging; or if you’re more visual than schematic, the iceberg metaphor to remind us how much of our sharp, craggy grief lies beneath the surface of our consciousness.

The other day in the car Benny asked me if I knew about the zones of the ocean. “I think so,” I told him, “the ocean gets darker and less populated with life as you go down, right?” Benny paused, bemused with my simple mindedness before responding, “well, yes and no, Dad. There are specific zones and they each have a special name: the Sunlight Zone, including the surface, the Twilight Zone, the Midnight Zone, and then the really deep parts, the Abyss and the Trenches (like the Mariana Trench)” he helpfully, patiently explained (Benny loves the Mariana Trench because it’s the biggest, just as he loves Ford Motor Company because they were the first large scale production car company and is fascinated (and terrified) by the box jellyfish, the deadliest in the world).

Benny’s aquatic disquisition reminded me of The Abyss – the late-Eighties suspense / sci-fi flick about extraterrestrial life at the bottom of the ocean. Ed Harris and Mary Elizabeth Mastrantonio, submarines, implausible breathing scenarios, High Pressure Nervous Syndrome, and watery aliens. It’s a natural metaphor; everyone who’s grieving can relate to the concept of an abyss, or at least feeling abysmal (though, as I learned from Benny, the title of the movie is sort of a misnomer. The deepest points in the ocean are actually in the Trenches (or Hadalpelagic Zone, think Mariana Trench, the deepest spot on earth). The Abyss proper, (or Abyssopelagic Zone), is actually above that).

The movie’s plot was complicated by several factors: the military-industrial complex/Cold War/nuclear warhead aspect, a raging hurricane on the surface of the ocean, and the depths at which the action takes place – the film unfolds as a submarine rescue mission on the ocean floor at edge of a deep oceanic trench. The farther from the surface we go, the more complex adaptations necessary for survival (though as Benny helpfully pointed out, people long underestimated the biodiversity of the lower reaches of the ocean depths – don’t sleep on the Cusk-Eel!). 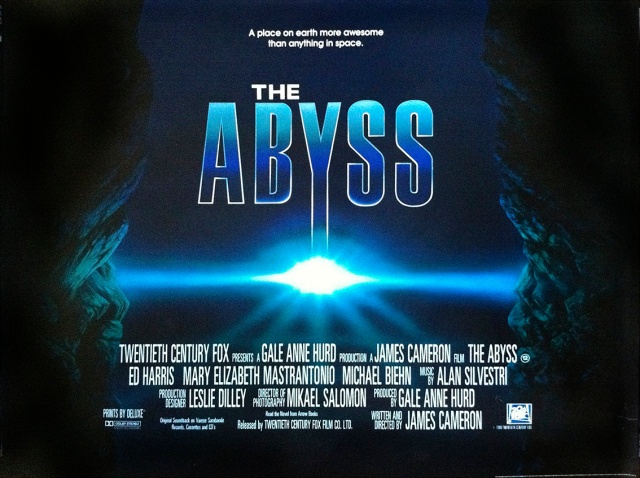 In The Abyss, the characters brought a lot of complications with them: Ed Harris and Mary Elizabeth Mastrantonio are estranged former spouses; Micheal Biehn brings classified military orders and compression sickness psychosis; and all the characters have to survive the storm, the aliens, the depths, and the threat of nuclear annihilation in order to try to figure out what happened to the lost submarine and return safely to the surface. The denouement comes when the aliens find Ed Harris’ self-sacrifice — based on the ongoing torch he’s carrying for his ex-wife — redeeming enough to intervene in human affairs and rescue the rescue crew. It’s a broken marriage (a different kind of loss, but one people still have to grieve) that’s the spark for the redemptive action of the narrative.

How does The Abyss (or the Trenches) relate to grief? Well, I love the layered image of the oceanic zones. We’re all fairly complex beings (some more than others). We all have idiosyncrasies and neuroses (some WAY more than others). Some of us are infirm, others hale, some are rich, while many are poor. Death finds us all where we live and doesn’t bother asking who’s ready. It’s like the hurricane or the pressure of deep water: elemental, inescapable.

Benny’s oceanography lesson recalled the structural complexities of grieving. As you descend into the layers of the ocean, it becomes colder and harder to see. The pressure increases quickly to the point where human beings can no longer survive without a pressurized environment (like Alvin!). And yet the layers of ocean unfriendly to human life make up a huge percentage of the cubic square footage of the planet and interact in important ways with the surface.

With every descent, there is greater complexity, increasing mystery, and much more difficult access. At some level, we would all probably prefer to avoid some of the confrontation and plumbing necessary to process grief and loss; the pressure and risks of staring at our most painful feelings and memories can make us flinch from emotional work like a gun-shy animal. But it turns out the human condition is hard to maintain with any equilibrium unless we explore its depths. And even if we try to ignore it, the abyss is there under the surface, teeming and churning along with the rest of our makeup.

If we’re going to cope with grief, we have to cope not only with the loss itself and the immediate aftermath, but with all our layers, from the Abyss to the Twilight Zone, and everything we bring down there; not just the stuff that’s visible all the time – the outward face we put on things, say, or the accepted symbology of grief, such as memorial services or flowers. We have to contend with who we were when grief found us, (which was already an overwhelming job in my case). It requires a lot of thought, preparation, stamina, and determination, plus avoiding the vagaries of HPNS, and whatever traumas await back at the surface.

Good luck. And here’s to benevolent alien life. I’m all for the hard work of grief. But what I wouldn’t give sometimes for an extraterrestrial deus ex machina.