Raising kids is hard work. The hours suck and the pay is worse. Parenting is an unpaid internship at the nonprofit of life. You get exploited, taken for granted, shat upon (sometimes literally), and all you have to show for it are some “intangible” rewards and “life experience” the baby boomers seem to think is a necessary rite of passage, but which sadly cannot be monetized or even converted into filial appreciation when you retire. Whatever parenting is, solo parenting is worse. It’s an unpaid internship at a Syrian refugee camp. It’s a total mess, you run around like your hair is on fire, and at the end of the day everyone has PTSD and dysentery despite your best efforts.

When I grieve, sometimes I miss Nina herself – the intangible experience of her, you might say — the way she smelled, which was never just the lotions, shampoos, or perfume she used, but the combining of those things with Nina’s skin, hair, and body. I can open up a bottle of everything she ever wore, but it won’t recapture it. I miss hearing her play guitar and sing while I’m making dinner, and no matter how many times I play her favorite songs on my iPhone, it can’t recapture that.

But lots of times I’m also grieving the more prosaic loss of the second unpaid internship position we used to have here at the Duberstein-Riggs Emergency Resettlement Program (DERP). Nina was an indefatigably dedicated intern. She held executive director level responsibility, yet had no benefits or salary. Irreplaceable.

In the time since Nina died, like any dynamic non-governmental agency, our household has not stood still. Both of my formerly tiny boy children decided that right after Nina died was the absolute best time to start their sexual awareness and development. I was fully prepared to be on the front lines of this discussion. I believe Nina’s exact words were “don’t look at me; you’re handling that” to me, and the time-worn, yet remarkably effective “ask your father” to the kids themselves.

But I intended to strategize with Nina, even if I carried out the plan. And I wasn’t prepared for the discussion to also entail nascent sexual interest, which, for god’s sake why do boys even need any more?! The world is overpopulated, does not seem to need any more sexually active white men than it already has, there are so many video games, and we’ve got VR simulations that are starting to be frighteningly realistic, I mean, couldn’t they just e-onanate? Online dating is already a thing, why not online relationships?

Actually, I like to think I faced this crisis squarely, with uncharacteristic skill, though I had input from friends and a helpful review of some very good kid-level books on the subject over at Cup of Joe.

But that was only the most immediate and salacious solo parenting crisis. Kids are complicated, and they get increasingly complex as they age. My younger son, Benny, was an adorable little kid, all cheeks and grinning. His proclivity for cuddling only enhanced our notion of him as a sort of nuzzly family mascot. Nina had a special bond with Benny. Not that he and I weren’t close, but the two of them were peas in a pod. I cannot imagine a mother-son tandem with a greater shared bond for cuddling something soft and warm.

Turns out that a lot of Benny’s nuzzly, fuzzy ways are, as with most people, mechanisms he uses to cope with and mediate his reality. They are cute and delightful at times, but they are also masks. And the older he’s grown, the more he’s taken to living in his head, and the harder he gets for me to access. I am dying to hear Nina’s breakdown of Benny. I’m sure she’d be anxious for him, but I’m confident in the depth of insight she would offer.

Meanwhile, his older brother Freddy has never met a maturation he didn’t crave. He started talking about getting his driver’s license not long after learning what a car was, and as soon as he could make interrogative statements, he was questioning society’s strange, inequitable distinction between children and adults. He is a wonderful and challenging kid, and a lot to take on by myself. My analytical approach to life is not so well suited to nurturing Freddy’s artistic side, which Nina treasured and understood in ways I can’t.

Freddy’s personality trends type-A and he struggles with obsessive-compulsive behavior. Benny’s is a strong Type B-. I call him my child Bartelby: he’d prefer not to. Not surprisingly, as the two of them have grown into more distinct, mature personas, they’ve been fighting like cats and dogs. They adore one another – just watch the two of them plead to be able to sleep in the same bed on a school night and you can see they are each other’s security blanket – but as siblings competing for what turned out to be remarkably scarce parental resources, they butt heads a lot, too.

This is an area where Nina was not just a contributor, but the Thought Leader of our family dynamic. Nina would be giving the TED talk on DERP’s domestic policy approach. She not only researched and implemented parenting strategies with real skill, she had really keen instincts for engendering kindness and good will in the family. Without Nina, I feel like the director of development at an agency with no executive officers. I keep the lights on, but that just reveals the total chaos in here.

Our parenting dynamic wasn’t all Nina, to be fair. Even before she got sick, I did my share, or at least tried. But our parenting was 100% about collaboration. We both thrived on constant discussion: the dynamism in our dynamic was dialectic. Now I feel like my parenting style is devolving into a really bad monologue, a frustratingly ineffective echo chamber. I can hold myself to account – I’m Jewish, after all, the guilt comes free with the life force – but I am never certain that I’m holding myself to the right standards, nor for that matter if I’m being too hard on myself or not hard enough. There used to be someone on staff for that. 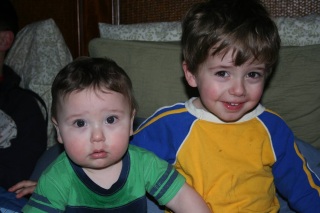 The division of labor for a solo parent is stark and unbalanced. You can delegate tasks – and to be clear, I get plenty of help from many sources, the paid and the press-ganged — but you can’t outsource the mental and emotional labor of being a parent. If there is a thing to be done, you either do it, or you make it so someone else can. There is no punting in solo parenting football: doctor visits, schools, diabetes management, dentists appointments, Tae Kwon Do, music lessons, playing with friends, and all the minutia that go with this continual barrage of events (immunization records, course fees, numbers of friends’ parents, recital dates, science projects, parent-teacher conferences, etc.) have to be stored in a readily accessible place in my skull. I really need to hire someone to build a database and find someone to manage it. I need an intern!

Then there’s the housework. Ugh. I have immense amounts of guilt for my formerly lax attitude towards housekeeping. Don’t get me wrong, I always did the stuff – washed dishes, did laundry, the normal tasks. But I never conceived of a clean house as fully my responsibility. I remember arguing with Nina about tidying up ahead of when the housekeeper came – it seemed absurd to me, but Nina understood that the tidying was just a way to get more out of the housekeeper’s visits, which we could only afford every so often.

Now the world has been turned upside down by Nina dying, I find myself hounding the kids to tidy up before the housekeeper comes. I feel guilt, both for my former recalcitrance with Nina, and for pushing responsibility on the kids with so much fervor (I have been known to play the occasional “I’m the only parent now and I need more help” card, which is a crappy thing to lay on an 11 or 9 year old with a dead mom).

I’ve also had the experience of parenting sick or, as women have been calling it for centuries, “Being a Mom.” Before everyone rolls their eyes, I want to point out the fact that I am a man, and so this is more than just the added challenge of maintaining parental equilibrium while feeling poorly. I am mourning not only the loss of my spouse, but also the loss of my former ability to lie prone on the bed moaning over my agony while my partner picks up the slack.

Seriously, though, even if Nina was vastly tougher and more functional than me when sick (she unequivocally was), she had a partner helping her. Solo parenting with a stomach bug is the pits, and that’s just a minor part. I’m also a diabetic parent, and sometimes I’m a diabetic parent sick with the flu, which, like everything to do with parenting, is much less fun solo.

I want to acknowledge the obvious fact that, although I’m parenting solo, I’m not alone: many people parent by themselves. Some, like me, do this by circumstance and others by choice. We are past the cultural age of nuclear family hegemony. But society still isn’t set up for this. Every form I fill out presumes some kind of other parent and there is no adequate affordable system of childcare or parental leave in the United States, which affects solo parents even more profoundly than couples (not that it’s a picnic for them, either). So if you have one of those people in your life, give them a break. Or a day off.

The other night Benny came bounding into my bedroom fifteen minutes before our reading aloud time, when the boys normally join me. “I just want to cuddle and tell you about my ideas for a Halloween costume,” he said before I could stop dozing over my book. “I’m either going to be Master Chief from Halo or I’m going to be a ghost tree. Which do you like better?” Though I wasn’t yet seeing clearly and there was spittle attaching my lips to one another, I found a response right on the tip of my tongue, as if Nina had laid it there while I drifted off: “I think you should be a ghost goat tree, and we can stick Moroccan tree goats in your branches and they’ll all wear sheets.” Gales of delighted laughter ensued. If you know Benny, you’ll understand how nothing makes him happier than a furry animal pun. This was maybe my proudest solo parenting moment so far. Of course the next day I found out Benny hasn’t been doing his homework and Freddy got his first disciplinary write up of the school year. So: Still really missing my co-intern, but staying on top of at least some aspects of my workload of intrinsic only value and enjoying its intangible rewards.

3 thoughts on “An Unpaid Internship at the Nonprofit of Life”